Workflow Studio is Omniscien’s newest product. Many of the tools provided in Workflow Studio have been used and evolved by the Omniscien team for nearly 14 years. In recent years some of the tools were made available for customer use such as Language Studio Drop Folders, which was accompanied by LSScript and LSTools. These tools have all been updated and are being released as a feature enhanced versions and have been combined with several other modules that collectively make up the Workflow Studio 1.0 product.

Earlier versions of Language Studio Drop Folders, LSTools and LSScript have been deployed successfully in numerous organizations around the world that needed workflow automation and natural language processing. Usually, but not always, these tools were deployed within the organizations in conjunction with machine translation as pre- and post-processing workflows. Some workflows were developed for customers by the Omniscien team developed, with many customers building their own very impressive workflows over time. Examples of some of the workflows that have been built are provided below.

At the same time, the Omniscien team has been adding features and enhancing the tools for their own internal use when gathering, processing, cleaning, and preparing data for building custom machine translation engines, and training machine learning and artificial intelligence-based models. With the release of Workflow Studio, these powerful tools are now available for anybody to use for high-volume data workflow automation.

What can you do with Workflow Studio?

Workflow Studio, as its name suggests, is designed to simplify complex workflows. To do this, many power processing tools are provided that are connected by LSScript, Omniscien’s high-performance JavaScript runtime engine. JavaScript is a very common skillset due to most websites being heavily dependent on JavaScript in conjunction with HTML. If your team has a web-developer, then your team already has a Workflow Studio developer who can build complex language processing workflows quickly and easily.

The list below is a small sample of some of the things that our customers have been able to achieve with Workflow Studio:

The above list is just the beginning. What will you automate with Workflow Studio? To discuss your ideas, contact an Omniscien team member for a demo and more detail.

Workflow Studio is available as a server platform that scales from one to hundreds of servers to meet the performance requirements of the most demanding environments.

Workflow Studio is designed to scale to be able to process large volumes of data. It is optimized for environments like AWS where capacity can be added and removed on demand. The features are so powerful that all of Omnsicien’s own data processing and workflow is managed with the exact same tools.

The following 5 core functional modules underpin the platform and make workflow automation and language processing accessible to all. 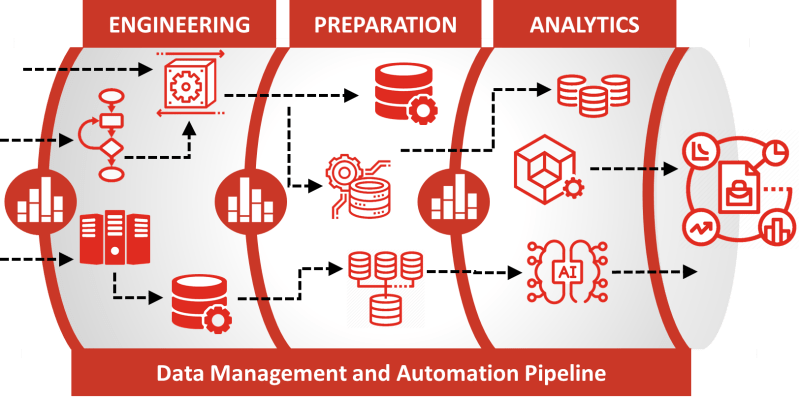 Workflow Studio operates as a standalone system or as a distributed job management platform designed to scale and spread large job workloads across multiple servers.

After assigning one instance of Workflow Studio Workflow Automation Server to operate in the Dynamic Job Distribution role, all job requests will be centralized and managed via an easy to use web-based portal. In the load balancer role, new instances of Workflow Automation Servers auto-register their presence and can be added and removed from the pool dynamically without any manual effort. As load increases or decreases, new servers can be added or removed.

Dynamic scaling based on load is ideal for cloud environments such as AWS, Microsoft Azure, or Google Cloud that can quickly instantiate new instances to handle sudden bursts of traffic. Each server instance can be configured to process one or more job types and for appropriate job volumes based on server configuration and capacity.

Jobs can be started or registered by a variety of different means. A simple REST API call from a custom application adds a job to the job queue ready for processing and tracking to completion. However, often there are data sources where the presence of a file or a record can be detected to automatically trigger the job registration process.

Folders can be monitored using a wide variety of file storage systems. Folders could be on the local disk, network disk, or remotely on AWS S3, FTP, SFTP, Google Drive, OneDrive Business, Dropbox, Box.com. Mail server folders can also be monitored. Files are automatically detected, copied to the server, processed and the output returned. Output can take the form of a new file being delivered, a REST API call to notify an external system that a job is complete, or an email containing the processed output.

Workflow Automation Server embeds LSScript, a high-performance ECMA compliant JavaScript runtime engine that is ideal for microservices and workflows. It removes the isolation between various tools and processes deployed within Workflow Studio in a variety of programming languages. Tools are exposed to the LSScript runtime via the LSTools Helper Object. LSTools provides easy access to some of the most advanced NLP functions, sub-applications such as web crawling, and a comprehensive set of file, data, and text manipulation features.

Because LSScript utilizes JavaScript, any developer that knows how to build a web page already has the basic skills to start building workflows. The most complex of NLP functions can be accessed with just a few lines of code. Complex language processing has never been easier and more accessible.

Each feature is built on a core of Artificial Intelligence, Machine Learning and Natural Language Processing

Machine learning enables machines to work more like humans so that humans don't have to work more like machines. Each feature is designed to augment human intelligence, enhance productivity, increase quality, and reduce cost. Artificial intelligence enables processing and organization of data that simply not be cost-effective or feasible with a human only approach.